A tale of irony and history.

The gentlemen who vacated their parking spot for us at the St. Joe River said, "There are 3 north - south highways in Idaho and one of them is in Montana." Astute observation. 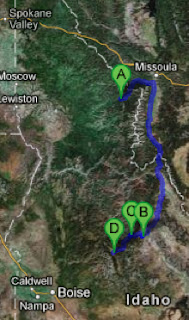 We climbed through the Salmon-Challis National Forest; camping at the Yankee Fork, a main tributary of the Salmon River was on our radar. When we found a spot level enough so we neither slid out of bed feet first, or conversely sent all the blood to our heads, a fierce wind storm kicked up. Settling in out of danger of blow down dead fall took some time. Most creek investigation needed to wait 'til morning.


Descending as it goes, the Yankee Fork roars into the Salmon at its confluence, but at higher elevations it's a sweet and beautiful little stream. Sweet and little and cluttered enough for me to do something I've never done before...set out with only half a rod, reel tucked in my pocket and my signature can of bear spray.

We tried quite a few tactics, moving upstream and down as we experimented. The only thing biting was the mosquitoes. I don't object to a mild swarm of mosquitoes when the fish are biting, but when they're independently on a feeding frenzy, I'm outta here! Since we've been home, I've consulted a decent map, I note that there's a spot along this route called Mosquito Flats. Without comparing coordinates, I'm convinced that's exactly where we were! 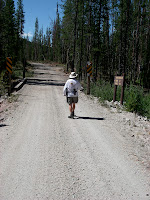 Though the creek looked promisingly fishy, not only did we not catch fish, we saw not a single sign of fish. Heading down the road, Donna said, maybe there's a weir downstream. I looked at her dubiously. "What?"

Yeah, she says, she thinks she read something somewhere. Hmm, less skeptical, more curious side-glance. 'Round the bend - sure nuff. 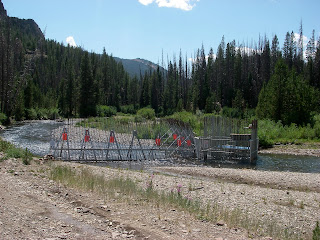 Another "what the..." moment! We hop out of the truck to survey the situation. Chinook salmon were hurling themselves at the weir. They made such a fierce banging rattle of the cage-like structure, I actually jumped a few times. Startling! Enter irony. So on a small creek, which I intended to fish with half a rod, the flimsy half, were the biggest fish I've encountered in fresh water - not that they could be induced to strike a fly. What were they doing there? Enter history - watch the video.


Further down the road, past a second weir, the sweet stream bed character of Yankee Fork began to change. We encountered more history, full of context with regard to salmon. Custer is the site of abandoned mining operations.

Following the Yankee Fork past Custer was disheartening as it's channelized by heaps of mine tailings. There's a good description of mitigation efforts on the Yankee Fork here & here.

On to Stanley and the Salmon River.