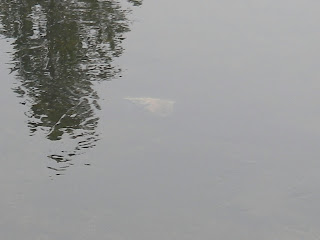 When we first arrived, Dave, Donna and I scouted the creek. Within 30 paces of the car, the 3 of us stood stock still. Donna shot the photograph... a tree, prettily reflected in the water, and a ghostly apparition. No ghost - salmon.


En route to Bear Valley, Dave told us the last time he'd been out this way he'd seen tribal members harvesting salmon. Thus prepared, I wasn't entirely surprised salmon ran into Bear Valley, but I was surprised to see one.

Particularly stunning to my untrained eyes was the seemingly deplorable condition this fish was in; it had come to spawn, but was all alone. It labored breathing, its gills barely moving, struggling to stay alive, but slowly dying. Dave said the salmon had likely traveled 900 miles to get to Bear Valley.

Consulting Google Maps, from Astoria, Oregon to Stanley, Idaho is nearly 700 miles by motor vehicle. This fish deserved more credit than a measly 900 miles. The route (highlighted in red) is long and the obstacles many: dams, weirs, hatcheries, hatchery trucks carting fish around dams. To the salmonids it must be like making the trip twice - which of course they do.

Depending on who's counting, there are as many as 200 more dams than shown here in the Columbia basin, but these are the dams that significantly impact salmonid migration in the Columbia - Snake Rivers.

Salmon die. One can't lament the cycle of nature that goes 'round and 'round with or without notice. Still, even the most casual observer must note the severe effect dams have on migrating salmon & steelhead. Despite legal arguments to the contrary, dams are not a natural barrier for salmon to negotiate. They're a longstanding source of salmonid decline, mitigated by hatcheries, (often funded by power companies) that lull average good citizens and anglers into a false sense that all is right with the world.

As an instructor, I tell students fishing is a thinking sport: it's a whole rich experience that's not only about catching fish, but protecting fish as well. I invite you to think about, and advocate for the things you love.

Note: In an earlier post, "Road Trips & Historical Markers" I referenced Bakke's "CHRONOLOGY OF SALMON DECLINE IN THE COLUMBIA RIVER 1779 TO THE PRESENT". Some more egregious notations are here.