Down by the riverside...

Blue skies and sunshine take the chill off an early Arizona morning. Phoenix Fly Casting instructors teamed up with volunteers from Arizona Flycasters Club and our friend Bill Larson from Arizona Game and Fish to introduce BOW participants to the sport of fly fishing.

The fish managed to elude us, but it was easy to catch the good time vibes of camaraderie and the exhilaration of having fun outdoors.

Build it and they will come... 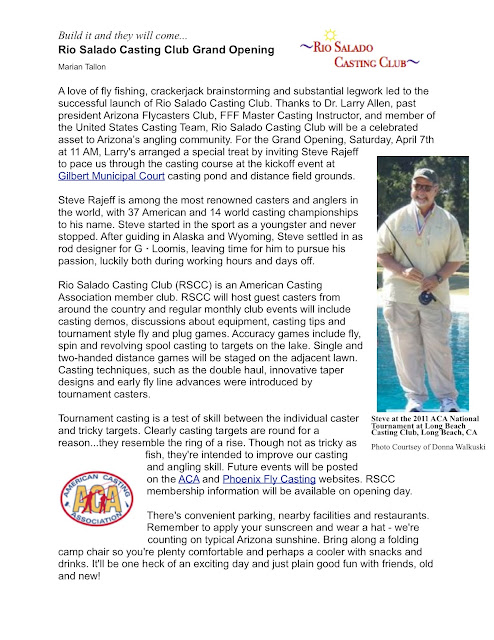 Posted by Marian Tallon at 7:21 PM

Hiking with a Fly Rod - Just for Fun


It was a pretty day and the 3 of us set out for a hike in the Phoenix Desert Mountain Preserve. We came across so many fishhook cactus I thought - well why not.

Donna was quickly pressed into becoming a photographer and I, a spontaneous stunt caster.

What the heck was I thinking? It was all in good fun and when it was all over, we were tangle free and unscathed. It was rather thrilling dodging the cholla with my fly line. The ground was littered with cones from a late night javelina buffet.

Donna wanted me to slow my tempo, so the fly line would better show in the pics, but I was slightly paranoid about becoming a cholla pincushion. In a full screen view here, or here, I can see I may have rushed my forward cast a few times, which speaks to my earlier post about our loops being an instructive teacher. Our loops alert us to corrections we need to make in our stroke as we cast.

A steady, consistent cast can keep your fly line from fouling between saguaro and mesquite bush. You don't need to try this at home, but I encourage you to think about how your casting style, regardless of what style you're generally most comfortable with, can and does matter in a tricky, sticky situation. Adapting our style can optimize our fishing.

Just so you know, our dog Indie doesn't usually sport a lavender bow. Indie became a "Leave No Trace" hound and did her chic bit by fashionably donning found rubbish without complaint. Very fetching [pun intended].