This post began with the story of an intrepid angler, fly casting into the early howl of Hurricane Sandy.


Tough guy, yes, but if he can do it, given the circumstances, what of the angler enjoying a mild breeze comfortably slouched in a barcalounger? Inconceivable! Get up, go cast, no excuses.

Well, given the circumstances, while tracking the storm and keeping tabs on friends and family, a quickie post about casting in the wind may have seemed cavilier. It deserves explanation.

Based on my recollections growing up in New Orleans and experience living in Arizona, storms, hurricanes, tornadoes, dust storms, deconstruct into times: before, during and after. There's decision time, a time when, fingers crossed, we think everything will be alright. Then, the time comes when everything is assuredly not alright!

Hurricane season officially ends November 30th, which makes Sandy all the dirtier of dirty tricks. After Katrina, I didn't know I could be twice fooled! Twice - by relatively weak hurricanes that historically would have likely fizzled after ricocheting around the Florida coast.

Before
Storms, storms of every kind require rushed prep time. Stockpile canned goods, dry goods, collect potable water, bottle water, ice. Top off the tank, stop at the pharmacy, round up the cats that don't come when you call them. Get batteries, charge the gadgets. Assemble emergency tools, flashlights, ice chests. Stow anything that can blow, shutter windows, move cars to high ground. Evacuate or ride it out.

Ready, now we wait...fidgety waiting to distract from the steady beat of worry. The wind's more insistent, the air tangibly different, a different color. Stark and unflatteringly bleak. Play some hoops in the driveway; play checkers; do the laundry while you still can; crack a beer; call your Mom. Take one last look around.

In before time, we tweet; a gentleman fly casts; kids thrill in the surf longer than they should. Cats, against our will, stay wherever they're at.

During
Except for those of us in imminent peril, we wait. We wait hunkered down. The power flickers, then goes out. The elderly are unnervingly calm and if we're lucky, the young are oblivious, intrigued, or youthfully insolent because there's so many grownups bossing them around. We, we are rattled, struggling for composure. We laugh, without humor, scant bravado. The roof overhead flies away.

We wait for power, for the grocery to open, for debris removal, for 911, for the national guard, the Red Cross, FEMA, insurance, banks, hospitals, streets to open, sewage treatment plants, a breath of air - fresh or not, a moment of normalcy, birds, plain yard birds - nothing exotic, transportation back to jobs, crematoriums, migrant workers, tap water. We move, we stay, good or bad nothing's ever the same again. And that's normal. Now we cry.

So Now What?
Good question. Sandy took a hefty toll on lives, the environment, fisheries, infrastructure and property - $60,000,000,000 in New York & New Jersey alone. Things break into bits easier than they piece back together.

We all need to be tough guys now, because we're in an in-between time: during the aftermath of the last crisis and before the next crisis. What makes me so sure we need to brace for a next crisis? Insurance companies are taking notice of climate change - that's what.

An article caught my eye in the fall issue of Arizona Wildlife News, "Sportsmen: The Original Conservationists". The title is self-explanatory and with the exception of a few knuckleheads, it's a sentiment I hold - sportsmen and women are good environmental stewards.

The article reports on survey results to questions posed to hunters and anglers. The polling firm, Chesapeake Beach Consulting, is described as "a large Republican firm". Not as sweet a sound as "nonpartisan", but never-the-less, the survey addresses common concerns of outdoor enthusiasts.

Nature is a good teacher. Whether following a game trail or stalking a nice fish, my experience is one thing leads to another, all the parts make the whole. Common issues make for common tasks. I urge you to contact your legislators to address these issues pronto! Without your prodding, unfortunately some will idly play chicken with precious time.

On the Road Again 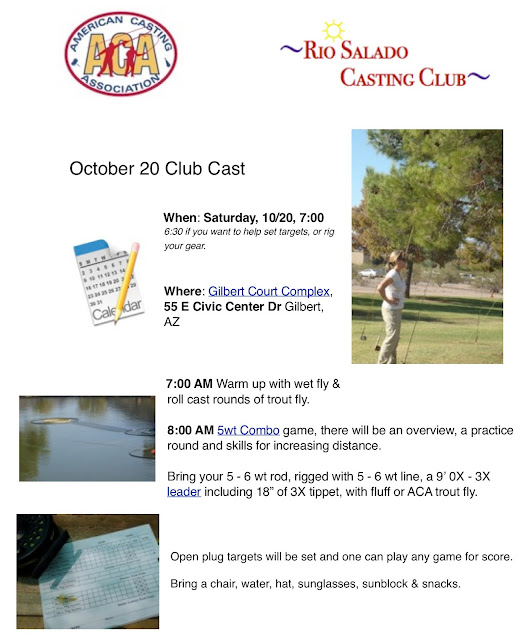